AMPED is proud to be featured in Life University’s “Your Extraordinary Life” Alumni Magazine! Dr. Jeremy Hess and Dr. Michael Viscarelli were interviewed regarding the founding of AMPED and their continuing partnership with Life University. 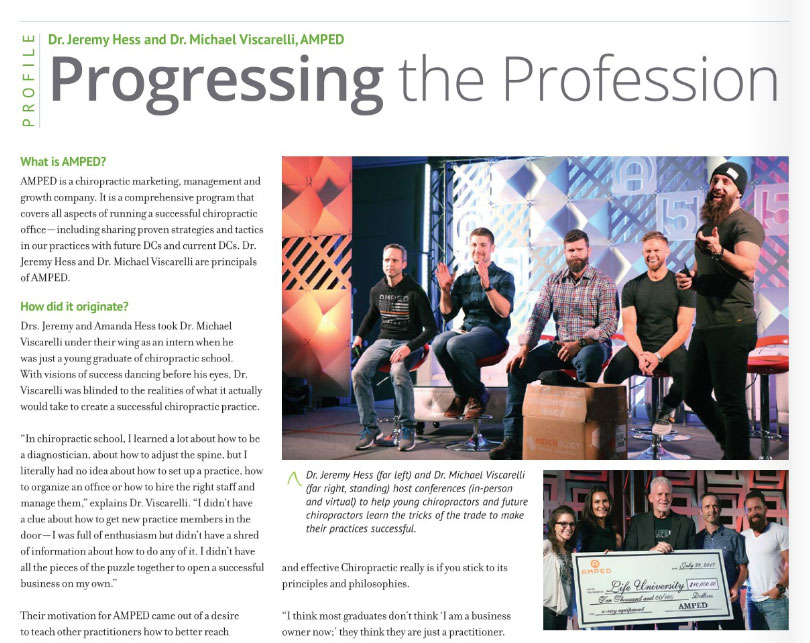 AMPED is a chiropractic marketing, management and growth company. It is a comprehensive program that covers all aspects of running a successful chiropractic office — including sharing proven strategies and tactics in our practices with future DCs and current DCs. Dr. Jeremy Hess and Dr. Michael Viscarelli are principals of AMPED.

How did it originate?

Drs. Jeremy and Amanda Hess took Dr. Michael Viscarelli under their wing as an intern when he was just a young graduate of chiropractic school. With visions of success dancing before his eyes, Dr. Viscarelli was blinded to the realities of what it actually would take to create a successful chiropractic practice.

“In chiropractic school, I learned a lot about how to be a diagnostician, about how to adjust the spine, but I literally had no idea about how to set up a practice, how to organize an office or how to hire the right staff and manage them,” explains Dr. Viscarelli. “I didn’t have a clue about how to get new practice members in the door — I was full of enthusiasm but didn’t have a shred of information about how to do any of it. I didn’t have all the pieces of the puzzle together to open a successful business on my own.”

Their motivation for AMPED came out of a desire to teach other practitioners how to better reach their clients and preserve the core principles of Chiropractic.

On your website it says that you two own and operate the largest and most successful practices in your respective states. What were some of the setbacks you had to overcome in order to gain that level of success?

“Of course, there are tons of setbacks from the schooling process to setting up a business,” says Dr. Viscarelli. “I think that the biggest challenge is overcoming the reputation built by unsuccessful practices. We have to overcome society’s impression of what Chiropractic is based on their interaction with companies that may have added too much in order to make money and confused the message to the public.” Both Drs. Viscarelli and Hess note that it’s paramount to convey to their communities how simple and effective Chiropractic really is if you stick to its principles and philosophies.

“I think most graduates don’t think ‘I am a business owner now;’ they think they are just a practitioner. They have to think about networking, marketing communications and how to be more than just a technical person in a practice.”

Why do you feel personally called to help others learn the processes that helped you become successful?

“In order to achieve critical mass in our profession, we need to prepare students with a solid foundation in the principles of Chiropractic and ethical business practices,” says Dr. Jeremy Hess. “We want them to be able to thrive coming out of the gate. We see first- hand people overpromising and underdelivering to the profession, and we want to fix this by coaching students and new doctors on better approaches. We saw a need [for more principled chiropractors] and understand that different practitioners synergize differently with different people. We want to help people break away from depending on big names that came before them and establish their own success.”

Why is AMPED partnered with LIFE?

“We see LIFE as aligned in our values to raise up new graduates to successful contributors,” explains Dr. Hess.

“We leveraged our influence from our leadership down to our membership to advance the ideas of Chiropractic. There is momentum in recognizing who has big vision, drive and voice in accomplishing things that we want to see in the profession, and we believe LIFE is at the epicenter of Principled Chiropractic. AMPED is an organization interested in progressing Chiropractic and its philosophies at all costs.”